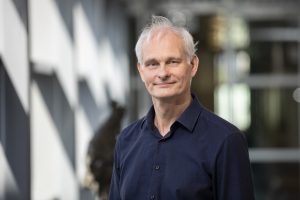 Prof.dr.ir. Jan van Hest is chairman of the board of PTN since January 2013.

Jan van Hest works at the cutting edge of (polymer)chemistry and biomedicine. He focuses on the design and synthesis of bio-inspired peptide-based materials and the development of conjugation methods for the preparation of biohybrid systems. The objective of his research is to construct smart compartments with life-like features, which develops along two main lines of research: nanomedicine and artificial cells and organelles. (Source: https://www.tue.nl/en/research/researchers/jan-van-hest/)

The NWO Spinoza Laureates do outstanding and key state-of-the-art explorative research and so they are an inspiration for young researchers in The Netherlands, Europe and worldwide. The Laureate receive 2,5 million Euro to spend on scientific research. The NWO Spinoza Prize is a mark of honor and a stimulus for further research. https://www.nwo.nl/en/research-and-results/programmes/spinoza+prize

Last but not least the department Chemical Engineering & Chemistry of TU/e are in the possession of an impressive track record on Spinoza Laureates including and former Simon Stevin Laureates:

About the Spinoze price
The prize is named after Baruch Spinoza (1632-1677). Spinoza was an internationally renowned Dutch scientist and a clear example of freedom in research - a tremendous figurehead for this prize.